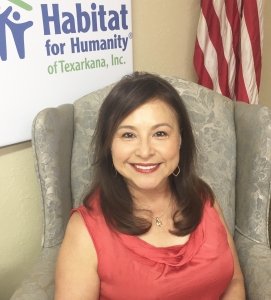 Mary has always been drawn to public service, and has previously served as Director for the local United Way.  She was moved by the Habitat mission when she attended a Habitat dedication for a single mother and her daughter, and saw the incredible impact of homeownership.

Mary first began her journey with Habitat Texarkana as a Board Member.  At one meeting, another Board member handed Mary a piece of paper, which turned out to be the job description for the Executive Director position.  Her current Board members had nominated her to be the first Executive Director for Habitat Texarkana! After some prayer and reflection, Mary accepted and started in her new role full time just a few months ago.  The future of her affiliate is bright, and she looks forward to the journey ahead!

Her favorite thing about being Executive Director is the people and community.  She sees everyday as a new opportunity to assist someone, whether it is answering questions about home repair or just being an empathetic listener.  She is especially grateful to the wonderful volunteers who give without asking anything in return – the true biblical way. Mary feels a sense of gratitude at the end of each day and is filled with hope for the next.

Mary has two children James and Gail, and two grandchildren.  Her grandson Gregory is 19 and currently serving in the US Air Force, following in the footsteps of his parents.  Her granddaughter, Janis Mae, will turn one in July. Mary sees being a grandparent as the fun and rewarding part of being a parent.

Fun Fact! In her free time, Mary likes to golf with a group called the Golf Cartel and participates in charity golf tournaments.  Her bucket list is to play golf in all 50 states at least once – she has just 9 states left to go!