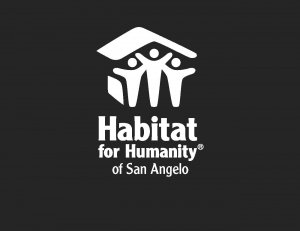 During National Affordable Housing Month, we are blessed to highlight Habitat for Humanity of San Angelo and their community relations!

In the past year, Habitat for Humanity of San Angelo’s greatest success has been the support provided by the women in their community. For the past three years, Habitat San Angelo has loved getting to work with over 100 women who have provided the necessary funds to support construction costs for one home. They asked that each of the 100 woman give $50 a month for one year, and now Habitat San Angelo is breaking ground on their fourth 100 Women Build house! Women in San Angelo are making a difference and now they have a group of men who think they are up for the same challenge as well!

Each year, Habitat San Angelo builds two new houses for deserving individuals in their community. The next homeowner family that has been selected is a single mother with four children. The family has waited for years to finally see their homeownership dream become a reality. Nearly two years ago, she first applied to Habitat and unfortunately due to her debt to income ratio, her application could not be accepted.  But Habitat San Angelo didn’t give up on her, and referred her to credit counseling. Six months later, she had reduced her debt and her re-application was approved. Habitat San Angelo is excited to be a part of her success story demonstrating Habitat “is not a hand out but a hand up”!

Habitat for Humanity of San Angelo is an amazing example of an engaged and dedicated community! We are blessed to serve you.

Fun Facts! Habitat San Angelo has incredible community support and while they don’t consider themselves ‘quirky’ they do have a lot of fun working together at their office!