Check out the savvy and resourceful Abilene Habitat for Humanity as this month’s Habitat highlight!

For the past two years, Abilene Habitat for Humanity has faced tough challenges in providing homes for families. Since the 1990s, Abilene Habitat has heavily relied on the Community Housing Development Organization (CHDO) funds being in good partnership with the city of Abilene. Recently, rule changes and limited staff at the Department of Housing and Urban Development (HUD), has slowed the process, leading Abilene Habitat to build less homes, approximately one house a year.

Abilene Habitat is taking action to overcome this challenge by pursuing alternative funding programs including Texas Department of Housing and Community Affairs (TDHCA) Bootstrap funding, and working to partner with 12 local churches in funding, program development, and construction.  Abilene Habitat has now secured funding and are working to acquire 18 housing units in a transaction that could help Habitats all over the state.  TDHCA states this type of transaction has never before been done in Texas. Steven Leggett, Executive Director of Abilene Habitat says “With God’s blessing and some hard work, we should be far enough along that we can tell the full story at the Lone Star Summit in Corpus Christi later this summer.”

To continue expanding their home building efforts, Abilene Habitat has even more planned! First, they will participate in this year’s Women Build and are kicking off the build with a ground-breaking ceremony on Thursday, May 10th. Secondly, they are planning  to implement A Brush with Kindness program. Lastly, Abilene is home to a large number of military retirees , so in an effort to serve this population, they will begin a Veteran’s Build later this year.

The city of  Abilene has carved out a rather unique connection with their military population. The community is a large supporter of Dyess Air Force base and its personnel- so much so, that the community involvement trophy awarded by the Air Force each year is now called the Abilene Trophy. Representatives from Abilene’s Chamber of Commerce even make up the selection committee for the annual award. The city of Abilene has won the trophy so many years in a row that they are no longer eligible to compete! Abilene Habitat is blessed to be in a community with such strong ties to serving their military population.

Many thanks and blessings to Abilene Habitat for Humanity for all your work in your community and spreading joy to the rest of the state!

Fun Fact! Currently, Abilene Habitat is located in an industrial park on the western edge of town along the railroad tracks. Mesquite trees and brush combined with the tan color of their building made it difficult for passersby to notice them, which is not ideal for a ReStore. They noticed that local artists had formed a group called the Palette of Purpose and were painting murals on buildings downtown. Abilene Habitat was able to partner with them to paint a Habitat-themed mural for the side of their building. While the mural was being painted last summer, they also arranged for the Abilene Industrial Foundation and the railroad to cut down the trees and clear the brush in front of their building. They celebrated the completion of the mural with a Paint Fest with painting and creative activities for children. Now people are noticing Abilene Habitat for the first time! 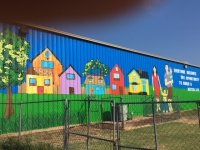