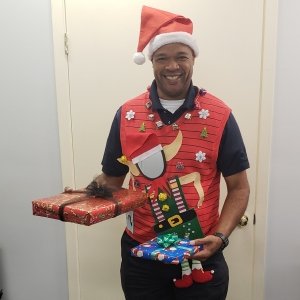 This November, Habitat for Humanity Texas welcomed Terrence Sommers to the statewide team to lead disaster recovery and veteran projects. Habitat Texas is proud to highlight Terrence in our Habitat Texas Family Highlight this month.

Terrence’s first experience with Habitat for Humanity impacted him for the rest of his life. When Terrence was in high school, a family he knew became a Habitat homeowner. Throughout the building of this home, Terrence spent much time with the family and volunteered with them to build the house from the ground up. Witnessing the whole community coming together for this family forever moved him, and showed him that people can come together to change the lives of those around them. According to Terrence, “that (build) inspired me to get involved and help people for my whole life.” Terrence further said that this moment taught him an invaluable lesson: “if you take care of others, the big guy upstairs will take care of you.”

Terrence came to Habitat for Humanity Texas because saw the opportunity “to be a bigger part (at Habitat) than just picking up a hammer.” His job allows him to both visit the different local Habitat for Humanity offices throughout the state and work to improve Habitat Texas’ affiliate support systems.

Terrence, in his short time with Habitat, has already experienced joy in the work he does. He recently received a phone call from a veteran he visited in Beaumont. This veteran lives with his disabled mother-in-law and has been struggling to keep their home dry due to Hurricane Harvey inflicted damage. Within a week, Terrence had a contractor begin to build the veteran a new roof so that he could continue to support his family in a safe environment. Terrence was moved when the veteran personally called to share his gratitude and surprise that the roof has already been worked on.

Habitat Texas has been so grateful for the work that Terrence has already done and the passion that he brings. He says that his favorite part of working at Habitat Texas is being able to look forward to coming to work each day to a team that is filled with energy for one mission: to get more people into safe and affordable housing. He certainly is an invaluable addition to the team!

Fun fact: Terrence’s whole family is involved with service work. Ever since his four children were little kids, they have been making food together for nursing homes, cooking food for underprivileged kids at school, and cheering on Terrence’s powderpuff football game to raise money for Alzheimer’s research.