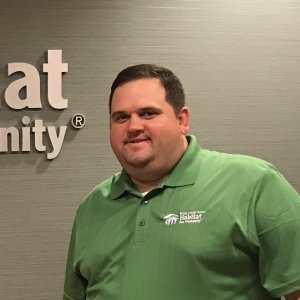 Andy York first experienced the world of Habitat in high school when he donated inherited land to Habitat for the construction of three houses and subsequently volunteered to help the builds. Andy’s donation started a chain of events for the Bryan/College Station Habitat that led to further land donations that resulted in an additional 13 houses on that street. Andy states, “This was an example of God’s hand at work, and the subdivision was named Miracle Place, our first one in Bryan/College Station. In hindsight, I feel like the boy who gave Jesus a few fish and loaves of bread, and God did the rest.”

In college, Andy reconnected with Habitat through a build sponsored by his church, and continued to volunteer every couple years. In 2012, thoughts of Habitat always seemed to be in the forefront of his mind and remained there in the summer of 2013 when he was laid off from his job at a retirement community. Andy states, “I felt God leading me to Habitat, although it didn’t make sense at the time.”

In September 2013, Andy joined the staff as the ReStore director and by November of that year he had moved into the role of Director of Finance, a match to his degree and career experience. Two years later, in 2015, the Board asked Andy to be the interim Executive Director and it became official in April of 2016.

Andy’s is most drawn to the mission of Habitat, stating “It starts with God’s love for us, and our mandate to love our neighbor. It’s beautiful to see how Habitat brings people together to build homes and community, but my favorite aspect of Habitat is the hope we bring to families for a better future, and I can’t imagine any better way to use my energy.”

He remembers once sitting with a future homeowner during the meeting where she made her paint color, cabinet, and flooring selections. This woman is wheelchair bound from cerebral palsy, but has the personality of a 50 foot smile radiating sunshine. She said, “I never in my life thought I would be picking out the colors for my own house.” Her evident joy made a long-lasting impact on Andy and solidified his faith in his work.

Andy is a member of the Bryan Rotary and College Station Noon Lions Club. He volunteers with Girl Scouts in his daughters’ troop and helps lead the Brownies this year. Additionally, he volunteers as one of the organizers for the Brazos Valley Jeeps (area jeep club).

Fun Facts! Andy’s wife Amy is a kindergarten teacher and they are blessed with two daughters: Abby, 10 and Audrey, 8. Right before this past Christmas their dog had puppies for the first time! They are currently wrangling six Blue Lacy puppies and one tired momma dog.