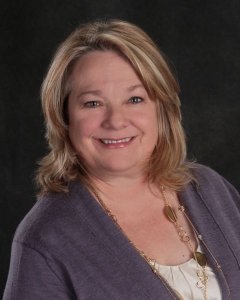 This month Habitat Texas is proud to highlight the Executive Director of Golden Crescent Habitat for Humanity, Cynthia Staley!

Cynthia Staley has been the Executive Director of Golden Crescent Habitat for Humanity for 16 years!

Cynthia felt drawn to the nonprofit mission and began her career full time; but soon her priorities shifted as she married and had two children. After some time, she began grant writing and development work as an independent contractor. She then moved to Victoria in 2000 and started as the Executive Director for another non-profit in town. In June 2001, Cynthia’s journey with began when the hiring committee called her in for an interview, and that sealed the position. She has been the Executive Director of Golden Crescent Habitat ever since. Cynthia references the quote by Teresa of Avila to summarize why she serves at Habitat “Christ has no body now on earth but yours, no hands, no feet but yours. Yours are the eyes with which Christ looks out his compassion to the world. Yours are the feet with which he is to go about doing good.  Yours are the hands with which he is to bless us now.”

Cynthia walks into the office knowing each day is unique in the Habitat world. Plans are often redesigned by 9am, the work from her first month in July 2001 is much different than the world of Habitat today- but it’s the challenge that keeps her moving. One thing has remained the same since her first day 16 years ago, the mission- “we are loving those in need around us”. Proverbs 21:13 says: “Whoever closes his ear to the cry of the poor will himself call out and not be answered.”  Cynthia states, “If we expect God to hear, and answer, our prayers, we cannot ignore the poor at home and around the globe. We hear the cry of the poor at Habitat every day.  Working here is one my biggest blessings!”

Fun Facts! Cynthia soloed in her dad’s Piper Cherokee airplane when she was 16. She was a MUCH later in life mom – she had her first birth child at 40!! – and she LOVES her children and grandchildren.  They keep her young!!!